Discernable on Locals
Politics • Culture
This is the home of the Discernable® Community - a safe place to discuss and share ideas and plans to create a better world.
Interested? Want to learn more about the community?

Puggle@Discernable
October 03, 2021
Some Good News For Once!

I was in a meeting the other night, and a gentleman named Patrick Jack (he has no socials) read out a list he keeps of good news throughout the pandemic.

It was really encouraging to hear it collated together. He emailed it to me and you can read below (his research, not mine, un-checked):

It’s been a month of bad news, but here is some good news:

On September 1, The Editorial Board of The Age published their provocative editorial entitled “Victoria can’t go on like this”. They denounced the unending rolling lock-downs, and demanded a clearer and faster exit path.
Selected Quote: “Premier, your state needs hope. No more lectures about compliance. No more measures that have limited if any evidence to back them just in case they might assist around the edges.”

On September 6, The Sydney Morning Herald publishes “We need to talk about death so we can live with COVID-19” by Rodney Allen, a Sydney neurosurgeon, who called on political and health leaders to accept that ‘Covid Zero’ was not possible, and that they accept living in a world with Covid.
Selected Quote: “The only sensible approach is that when we reach suitable vaccination thresholds, we open up the economy and our society. I hope we can reach these vaccine thresholds but if we cannot, we still have to open up.”

On September 13, on The ABC’s Insiders Waleed Ali states “Let me paint another ridiculous scenario, you could have zero deaths and zero hospitalisations with a permanent lock down. No one thinks that's a good idea.”

On September 30, The Spectator published “It’s for your own good” by Aboriginal activist Warren Mundine, denouncing the extraordinary powers of police to enforce health orders.
Selected Quote: “Until my teens, I lived under the control of bureaucrats who micro-managed Aboriginal lives under the guise of ‘protection and care’, bureaucrats who treated Aboriginal people like children, not trusted to take care of themselves or make their own decisions. I don’t want to live my remaining decades under even more stringent controls, imposed by even less compassionate bureaucrats, all under the guise of public health.”

Also on September 30, former Prime Minister Tony Abbot defends protests across Melbourne, including at the shrine, highlighting that violence was in most cases initiated by police, and that protesters had a right to be there.
Selected Quote: “Obviously people shouldn't break the law, but you've got people there at the Shrine of Remembrance with flags, with placards, to the best of my observation they were simply there to make a point. They weren't being violent, they weren't being vandalistic, they weren't being destructive.”

On October 2, The Age published “Freedom, interrupted: Will the liberties we lost to Covid be regained” by C. L. Grand. GP David Barton decries funeral descriptions and former race discrimination commissioner Tim Southphommasane expresses his concerns at lost liberties.
Selected Quote: (By Mr Southphommasane) “At the moment, those most exercised about liberty have been libertarians and, most notably, those on the far right of the political spectrum. I am deeply alarmed at how much indifference there seems to be from the usual friends of human rights and civil liberties”

But it’s not just journalists finally turning around, it’s people and governments.

On September 13 A Chanel 9 report by S. Seyfort shows that Melburnians Google mobility data, is up 20% - 25% from 2020 lock-down levels, with more people in parks, workplaces, and shops.
NSW even now permits Victorians to Enter their state provided you have a place to stay and continues to do so.
The Australian Department of Health has acquiesced, and implemented a scheme for Vaccine side effect compensation, currently providing $5,000-$20,000 compensations, with larger claims (for example for death) to be implemented soon.

Over October 1-4 Gladys Berejiklian and John and Barilaro are on the way out the door after ICAC charged Gladys, with John complaining about social media satirist FriendlyJordies on his way out. Lock-down sceptic Dominic Perrottet is the Premier Presumptive.

Federal polls indicated that people voting or leaning towards independents rose from 7% last November to 13% this October. The highest level they have been under the current federal government. (Newspol-YouGov, Roy Morgan)

Victorian polls show that while Labor still leads, their lead has steadily shrunk at a rate of 2% per month from 60% in August to 56% in late September.

In Social Media over the past year:

• Voice for Victoria twitter accounts has risen from 3k-13k follows
• Tim Quilty has risen from 600 to 2k
• David has risen from 5k-14.5k, with tweets often being liked 1k-3k times, a VERY popular account for its size and niche content.
• Nathan Buckley’s ‘no jab no job no way’ class action just cracked $500,000 on Go Fund Me
• Monica Smitt was released from prison WITHOUT having to cease her activism (an abject win against attempts by the courts to curtail speech)
• The Great Barrington Declaration has been signed over 860,000 times

Finally, and forgive me if this is sounds self congratulatory, I bring snacks to Melbourne’s Unhoused each Friday night at queen Victoria market. 20, 50, sometimes 100 people are there getting food or clothing from whatever charities are still permitted to operate or are willing to violate health orders to ensure someone who sleeps on concrete eats that night. Recently, especially during protests, police regularly arrive. They sit there in their car, look around, wait 10-20 minuets, then LEAVE because they damn well know that if they try to arrest 50 homeless people and a handful of volunteers for not socially distancing or checking in, then it would be game over for them.

Part 2 of our debrief

It's free for anyone to watch but only paid supporters can ask questions/comment. Head on over to our private community: https://discernable.locals.com

We're all missing The People's Project. I'll keep you company with some outtakes.

Be respectful
Be curious
Be intellectually honest

Censorship Policy
I will only censor one thing, for the integrity of the community: I will not allow spamming or mass dumping of links designed to 'educate' everyone else in the group. This is NOT Facebook, and we all have similar perspectives on the lies that MSM and BigTech tell so please don't bombard everyone with 10 posts and 100 links on why 'Big Phar$ma is Evil'.

We are here to support one another, respectfully, like adults.

As for Locals? They basically don't censor anything so feel free to talk about all the dreaded words like 'vaccine', 'ivermectin', 'The Great Reset' etc.

Just remember if you are revealing personal information or asking for specific information (like say, a Dr that prescribes Ivermectin), it might be a good idea to make your post 'subscriber only'. Free members on Locals can see and like (but not comment) on normal posts. But ...

Try not to laugh at the beautiful extra “artwork” added to the QR code’s at the bbq site today. 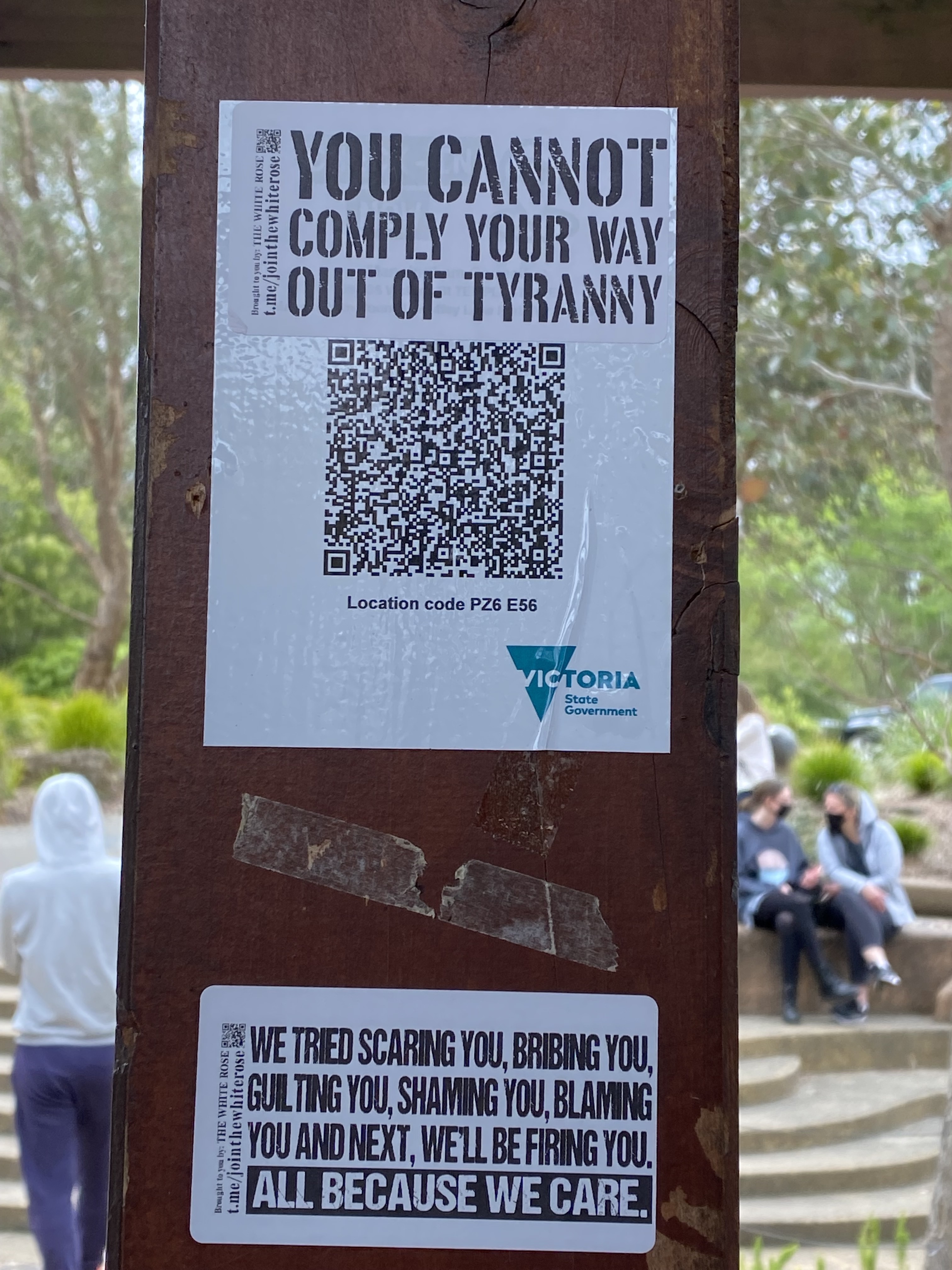 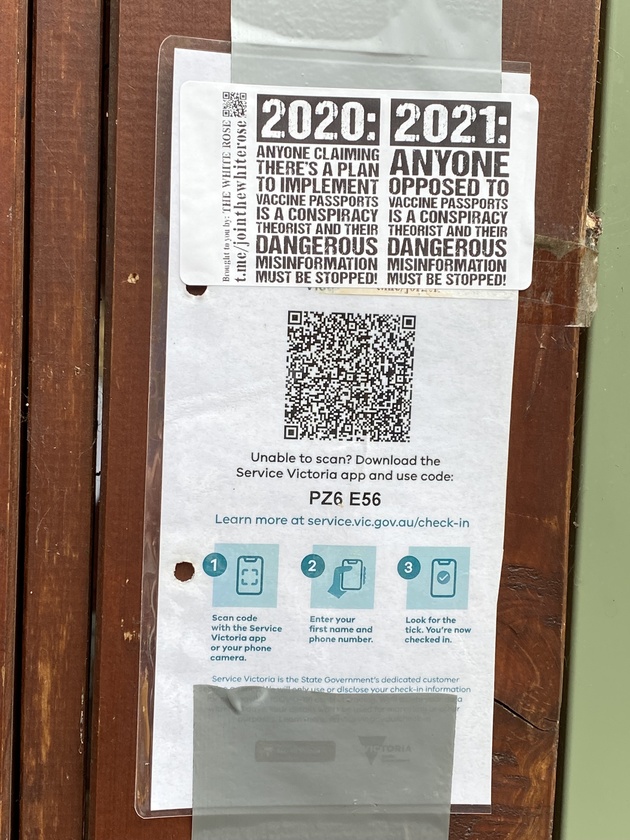 Gday lovley people,
Im Al, new to this. Considered a "batshit crazy, tin foil hat wearing conspiracy theorist"...ummm but not. Centrelink never got back to me if i was classified or deemed eligable for the DSP under "diagnosis" when i used this. What more "mentally unwell" can one be to be referred to this by the assistant police commissioner? (kidding guys, keep your hats on). Just to ask a question gets me demonised in life/work/socially. So, im in healthcare, highly educated but have questions well maybe not questions anymore, gone past this but more why?? Id consider myelf "normal" or maybe close to LOL...kidding.
just thought id introduce myself to like minded new friends who don't judge people by the choices made medically or mainly experimentally to their own bodies. 🥳

Welcome, we are launching on this platform.